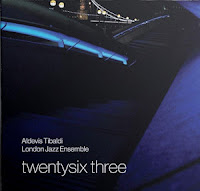 John Eacott (tpt/flug); Aldevis Tibaldi (ten/sop); Paul Taylor (tmb); Liam Dunachie (pno); Richard Sadler (bs); Chris Gale (dms).
(Review by Lance)
Becoming more and more disillusioned by what is passed off as jazz these days a disc such as this gives me hope for the future.
Imagine Mingus*, Monk** and Ellington***, composing and arranging today and you get an inkling of where this is at. Indeed, the three composers mentioned actually provide the only non-original compositions on the album, the rest coming from the pen of leader Tibaldi.

Taylor's plunger solo on the opening Hunting Goose laid down the band's manifesto which I interpret as, "We will build for the future whilst maintaining the noble traditions of the past."
They do this admirably without, for one moment, suggesting that we are anywhere but in 2016. John Eacott, referred to by our JC in his memorable visit to the '606',  blows some fine trumpet and Tibaldi chips in with impressive solos on both soprano and tenor. The Italian, seemingly, is making waves on the London scene and deservedly so - he's an exciting and lyrical player.
Dunachie, is the kind of piano player that, at one time, seemed to have been washed away with the tide. Not so, he comps and solos - he swings for today. Swinging, as a verb, isn't a dirty word, music wise, on discs like this.
Black and Tan Fantasy respects Duke but doesn't pay lip service. Sadler on bass - bass rhymes with ace - on Black and Tan, he remembers Blanton but his ears are up the road. Gale, not only drums but co-produces along with Tibaldi and the result is nothing less than super satisfying.
My only problem with this excellent album is the title - wtf is twentysix three all about?
Lance.
Aldevis Tibaldi London Jazz Ensemble - twentysix three is due for release on Galetone Records on March 25.
* Weird Nightmare.
** We See.
*** Black and Tan Fantasy.
Share this
← Older Post Newer Post →

Stay up to date on the latest product releases, special offers & news by signing up for our newsletter.